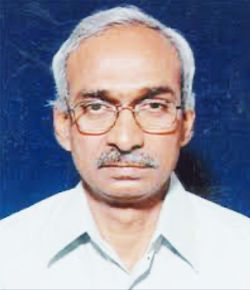 
Reformative and Responsive Leadership:
Being at the helm of affairs of institution of higher learning and believing in intellectual adventurism, integrated ways of human life and the need for perennial pursuance of Wisdom and Knowledge, I took initiative to develop the university according to the national mandate as unfolded in the reports of various committees and commissions on Higher Education since independence and the set out direction given by the University Grants Commission from time to time. This meant that the best academic and administrative practices were put in place thereby enabling first generation unrepresented and underrepresented students from the backward region of erstwhile, Andhra Pradesh and present Telangana state to get the best education that would enable them to compete on equal footing with the students from other reputed universities.

Academic Reforms and other initiatives:
Choice Based Credit System (CBCS) was introduced in all the Post-Graduate courses offered by the University in campus and constituent colleges from the academic year 2009-10 onwards. CBCS paves the way for the University to compete with the best of the institutions in the country and abroad. Further, the introduction of credit system facilitates mobility of students from one university to the other, anywhere in the world. The University also introduced two compulsory choice based extra-disciplinary papers at PG level to provide academic flexibility. This also includes project work as one of the components of curriculum so as to enable the students to come in contact with the realities of the world outside the university. Additionally, innovative and students empowering programmes were introduced by enabling students to take up add-on courses in communicative English, soft skills, ethics, human rights, environment, wellness and community work, so as to aid the overall personality development and inculcate basic values in the students.

Post Retirement Engagements:
My passion for academics especially in the realm of higher education keeps me participating in the related events in different capacities, which include,

Self-Appraisal:
My biggest asset is being a social science background has always been the ability to listen to what others have to say about a subject and respond to that in the best possible way; either by incorporating what they have to say in a process, if the suggestion is valid, or convince them of the fallacies of their argument logically, without hurting their feelings and address the issues with humane touch. I see myself as a team player and effective leader who can carry a large body of people having diverse opinions with me on issues of public interest bearing consequences for the State and the Nation. I believe that I am a sincere person driven by the urge to be diligent for the good of the society. As an educator and educationist, my priority has always been education and specifically, higher education with human face.