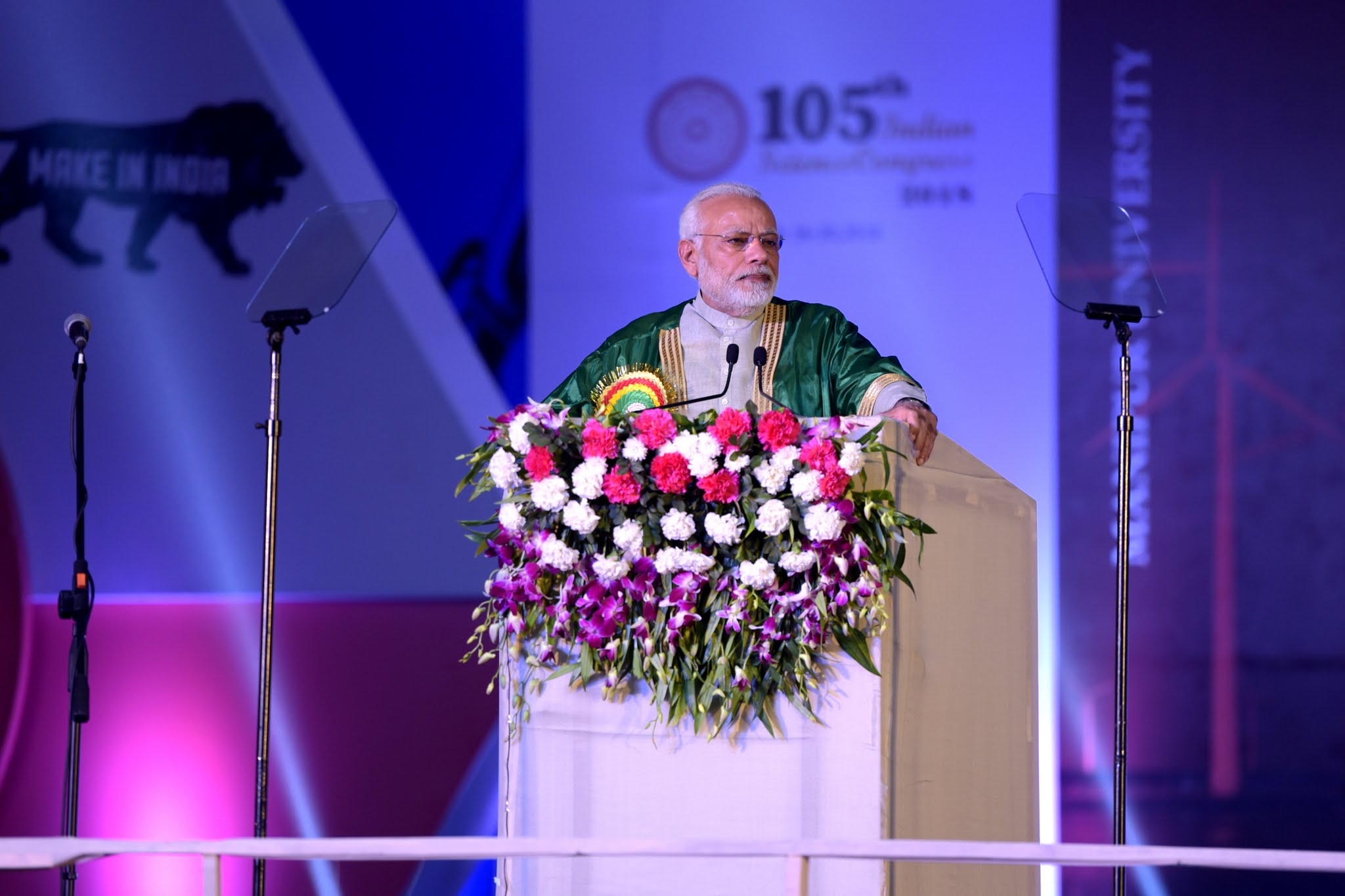 Concerted efforts are being made to achieve complete elimination of TB from India, he said. Few days ago, at the ‘End TB Summit’ in New Delhi, we demonstrated our commitment to eliminate TB from India by 2025, five years ahead of the WHO target of 2030. Our space research program has the capacity to successfully place over one hundred satellites in space in one go. This has been made possible through the hard work and dedication of Indian Scientists.

After the success of Chandrayan-1 we plan to launch Chandrayan-2 in the coming months. This fully indigenous effort will include landing and travel on the surface of the moon by a rover. The greatest scientist of the last century, Albert Einstein had given the theory about “gravitational waves”. It is a matter of immense pride for all of us that 37 Indian scientists from nine Indian institutions participated in the international Laser Interferometer Gravitational Wave Observatory (LIGO) Collaboration and proved this theory correct three years ago. Our Government has already given approval to establish third LIGO detector in the country. It will expand our knowledge in basic Sciences in the areas of lasers, light waves, and computing. I am told that our scientists are tirelessly working towards making this a reality. I have talked about developing Clusters of Excellence in Science in Cities, around important Scientific Institutions. The objective is to create city-based R&D Clusters, which will bring together all Science and Technology partners, from Academia to Institutes, to Industries to Startups. This will help promote new discoveries, and create globally competitive vibrant research hubs.

“Prime Minister’s Research Fellows” scheme has also been recently approved. Under this Scheme, bright minds from the best Institutions in the country, namely, IISc, IIT, NIT, IISER and IIIT will be offered direct admission in Ph.D. Programme in IIT and IISc. This scheme will help address the brain-drain from our country. It will go a long way in promoting indigenous research in cutting-edge Science and Technology domains.

India faces major socio-economic challenges which affect large sections of our population. We need science and technology to help us make India clean, green and prosperous. He reiterated some of his expectations from scientists. A large proportion of our children are affected by malnutrition. To address this problem, the Government of India has launched the National Nutrition Mission. He called for suggestions and solutions to help us to meet the objectives of the Mission.

Our rivers are polluted. It requires your innovative ideas and new technologies to clean them. We need a multi-pronged approach including efficient solar and wind power, energy storage and electric mobility solutions, clean cooking, conversion of coal to clean fuels like methanol, cleaner power from coal, smart grids, micro-grids and bio-fuels.

A target of having 100 Giga Watts of installed solar power by 2022 has been set. Efficiency of solar modules currently available in the market is around 17% to 18%. If our scientists take a challenge to come up with a more efficient solar module, which can be produced in India at the same cost said Prime Minister appealing to our scientists. Imagine the resources we will be saving on this account. ISRO uses one of the best battery systems to run satellites in space. Other institutions can partner with ISRO to develop cost effective and efficient battery systems for mobile phones and electric cars. We need to develop new procedures, medicines, and vaccines to get rid of silent killers like Malaria and Japanese Encephalitis. Research should also be conducted in Yoga, sports, and traditional knowledge disciplines. Small and medium scale industry units have been the main-stay for employment generation. With global competition, they are facing increasing challenges.

He said we have to be future ready in implementing technologies vital for the growth and prosperity of the nation. Technology will allow far greater penetration of services such as education, healthcare, and banking to our citizens. India should become a major player in developing technologies, devices, standards and manufacturing for 5-G broadband tele-communication networks by 2020. Together with Artificial Intelligence, Big Data Analytics, Machine Learning and cyber-physical systems, effective communication will be a major ingredient in our success in smart manufacturing, smart cities, and Industry 4.0.Let us aim for India to be among the top 10 countries in the Global Innovation Index by 2030.

Four years from now, we will be celebrating the 75th year of our Independence. We have collectively resolved to build a New India by 2022, he added. We need to work towards shared prosperity, in the spirit of 'Sabka Saath, Sabka Vikas’. This goal requires whole-hearted contribution from each one of you. The Indian economy is on a high growth trajectory. But we rank low in Human Development Indicators. One of the important reasons for this in-consistency is major inter-state and intra-state disparity. To address this, we have launched a concerted effort to improve the performance of over 100 Aspirational Districts. We shall focus on important sectors such as Health and Nutrition; Education; Agriculture and Water Resources; Financial Inclusion; Skill Development; and Basic Infrastructure. All these sectors require innovative solutions, which cater to local challenges and requirements. The “one size fits all” approach cannot work in this case. “Can our Scientific Institutions serve these Aspirational Districts? Can they catalyze creation and diffusion of appropriate technologies that generate skills and entrepreneur-ship?” he asked.

This would be a great service to Mother India. India has a rich tradition and a long history of both discovery and use science and technology. It is time to reclaim our rightful place among the front-line nations in this field. He called upon the scientific community to extend its research from the labs, to the land. He said he is confident that through the dedicated efforts of our scientists, we are embarking on the road to a better future. The future we wish for ourselves, and for our children.

He said science in India is at its highest and we are improving on world ranking in the field of science and technology. India has the potential to be considered among the top three scientific nations in the world by 2030. Present government under the leadership of Prime Minister Narendra Modi has provided conducive environment to the scientists of the country. Hailing the Prime Minister as a great visionary, Dr Harsh Vardhan said that our Prime Minister has always been motivating his cabinet colleagues and officials to ensure that development reaches the unreached people of the country.

Hon’ble Chief Minister of Manipur, Shri N. Biren Sigh, addressing the inaugural session of 105th ISC said that this event will give an enriching knowledge and experience to the students and scholars particularly to the people of Manipur. This will also give an opportunity to the outside world to see this tiny and highly promising and beautiful state. This event has happened here in Manipur because of our prime minister’s determination to have a new India with North East India. He thanked the Prime minister for his support and belief in the people of Manipur and government. There was a time when the people of north East felt that we have no parents and guardians but today North East and Manipur has got our guardian after Narendra Modi became Prime Minister of India, he said. It is a matter of pride for a small state Manipur to organise such a scientific extravaganza for the first time and it is a proud moment for the Manipur University.  This tiny North Eastern state Manipur also has several indigenous traditional science and art forms. He asserted that we are trying to highlight and showcase those art forms to the treasure of the 105th Indian Science Congress.  With 94 affiliated colleges and thousands of students, we have been waiting for this opportunity to host this prestigious Science Congress, he stated. This event has given us the window to showcase ourselves to the world of academics. This event will be a game changer for all of us. Scientific temper is an important component of human personalities. This had become important for all in today’s life especially for young students. Sharing his progressive vision he said education with scientific temper is important for India in growing up in this competitive world. In order to think critically and out of the box, we all need scientific temper. He strongly urged the young colleagues of the state to learn the spirit of scientific enquiry and the scientific temper. He concluded by welcoming all the delegates and participants to this tiny state Manipur. He wished to all for a pleasant stay here in Manipur. In delightful note, he sincerely wished to make this edition of Indian Science Congress a grand success and hoped that all of the delegates take back wonderful memories of the state in their hearts to come back again. He, on behalf of all, accorded warm welcome to the Prime Minister for his support in organising the ISC and also termed him as legendary figure.

Prof. Achyuta Samamta, General President, Indian Science Congress (ISCA) addressing the inaugural session said he rather believe that it was predestined to host the 105th Indian Science Congress does exude significance as it is for the second time being held in North East and first time in the picturistic state of Manipur. The focal theme “Reaching the Unreached Through Science and Technology” definitely justifies this session being held in the North East which considerably remain in the Prime Minister Naredra Modi’s thought area. We have multiple problems including poverty, hunger, cleanliness, health, sanitation and gender equality, etc. It is not the time that one leader should discuss work of disastrous anything related to that it time when we must sit together with scientists to find out the way to fight with this socio-economic menace. We India is very must fortunate to have one leader like Prime Minister Narendra Modi who has future vision to take future to the height with proper application of science and technology.

He applauded Professor Adya Prasad Pandey, Hon’ble Vice-Chancellor of Manipur University for hosting such a mammoth event in a very short period of two months time. Without his since efforts and the stakeholders of this University, it could have been impossible to have a successful event.