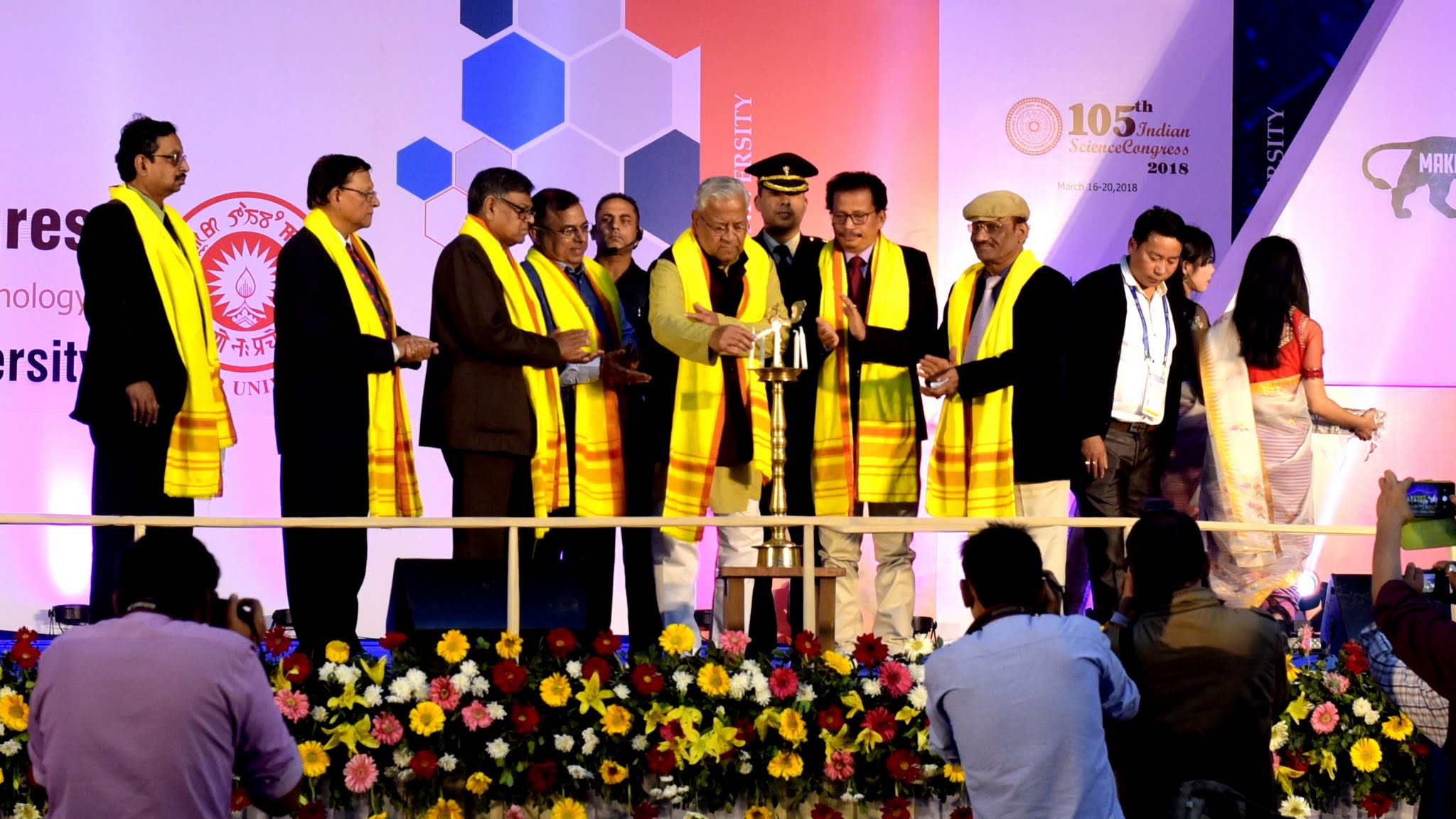 It may be noted that the Prime Minister of India inaugurated the five-day long ISC-2018 yesterday along with the Union Minister of Science and Technology, Dr. Harsh Vardhan.

School students from different states Viz. Telengana, Assam, Manipur  gave their performances before the commencement of the Inaugural function.

The Inaugural Function was started with the National Anthem sung by the MJP School of Telengana.

Shree Padmanabha Balakrishna Acharya marked his Inaugural Speech with greetings “Khurumjari”. Welcoming the young students to the North East, he said learning new languages of other regions is a great respect to the people who speak those languages. ISC which was scheduled to organise at Hyderabad has been shifted the venue to Manipur. It is blessing in disguise, he added. Children Science Congress is to empower our children with science and technology.

In his speech he said education is one of the most important instruments for men and women. Even if we become great scientists, scholars or philosophers, if we do not empower the people, society and nation, then we are selfish people.

We should not become a job seeker instead we should become a job giver. We require more entrepreneurs. India has 125 crore population and 65% of it is young people. These young people are our future.

India belongs to villages. We are integrated country and we have come to the North East but many of us may not know the 8 states of NE. He coined the term “NAMASTE” appropriately with the names of the North Eastern States where stands for Nagaland, A for Arunachal Pradesh, M for Manipur, Meghalaya, Mizoram, A for Assam, S for Sikkim, T for Tripura and E for East.

Elaborating the rich heritage and resources of the state, he said Loktak lake is the largest fresh water lake, nowhere in the world we’ll find such resources. Before India got its Independence in 1947, Manipur had already achieved it. Subhas Chandra Bose’s INA hoisted the first Indian flag at Moirang in 1914.

In his speech, he said we all should try to understand India and should preserve regional languages and its identity and diversity. Our first aim should be our national integrity. Every part of the country should be developed equally. The ‘fruit of Independence’ should reach to every citizen of this country. If Mumbai, Delhi and other states could shine, then Manipur, Nagaland and the entire North Eastern state should also shine.

Calling for initiatives to everyone, he said every MP, MLA, doctor, scientist and university should adopt a village. Manipur has a good opportunity for business since the state has international border at Moreh. ‘Ema keithel' is the only market where more than 2000 women run daily business which we cannot find nowhere in the world.

Prof. Adya Prasad Pandey, Hon’ble Vice-Chancellor of Manipur University gave the Introductory Speech of today’s inaugural function. He said it is a conference where our young champs are being given a chance to be future scientists. Department of Science and Technology and the National Council for Science and Technology Communication (NCSTC) jointly organised to communicate Science and Technology to masses, stimulate scientific and technological temper to young students to become good scientists. In today’s globalization and development, science should propel in the development of the society. The theme of this conference “Reaching the Unreached Through Science and Technology” is quite relevant to this interior part of the country. It’s time to protect the environment, control pollution, forest and our nature. If we continue to extort our nature, we shall suffer terribly in the future. Our young scientists should know how to co-exist with our nature. This Children’s Science Congress is a very important event for our future. He extended his gratitude to all the students for their participation.

Dr. Ashok Kumar Saxena said in his presidential speech that the Indian Science Congress is absolutely necessary which has become a permanent feature of ISC for the past one decade.

A painting competition for children and poster display exhibition were also conducted as a part of this programme. 27 participants from Telegana exhibited 7 projects and 5 from Manipur. A science magic show was also showcased by Rajenkumar Huirem to the children. DST Exhibition Competition was also held at MIT building at Manipur University where students from 12 states participated.

A souvenir was also release in today’s function.

Welcome address was delivered by Prof. P.P. Mathur (Scientific activities), ISCA followed by the lighting of the inaugural lamp.

Vote of thanks was proposed by Prof. Gangadhar, General Secretary (Membership affairs), ISCA.