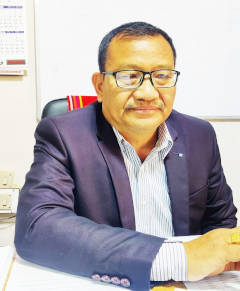 Actively involves in bringing and expanding academic connectivity of Manipur University across the country and the abroad.

Besides he has been a regular Resource Person at UGC-HRC,Gauhati University and NEHU in Refreshers courses and FIP (Orientation course) programs.

He has given keynote addresses and chaired different Seminars / Conferences at universities of India and abroad.

He has been actively involved as an organizer for international and national webinars since the first wave of pandemic as a Chapter head of Manipur, English Language Teachers’ Association of India ([email protected]) as an advisor of International Webinar committee member of India.

Dr. Irom Gambhir Singh is known for his activities in India and in the neighbouring countries for his tireless service as the national vice president of Council for Teacher Education Foundation (CTEF, since 2014).

Recently, he was unanimously elected as the president of Manipur University Alumni Association (MUAA)